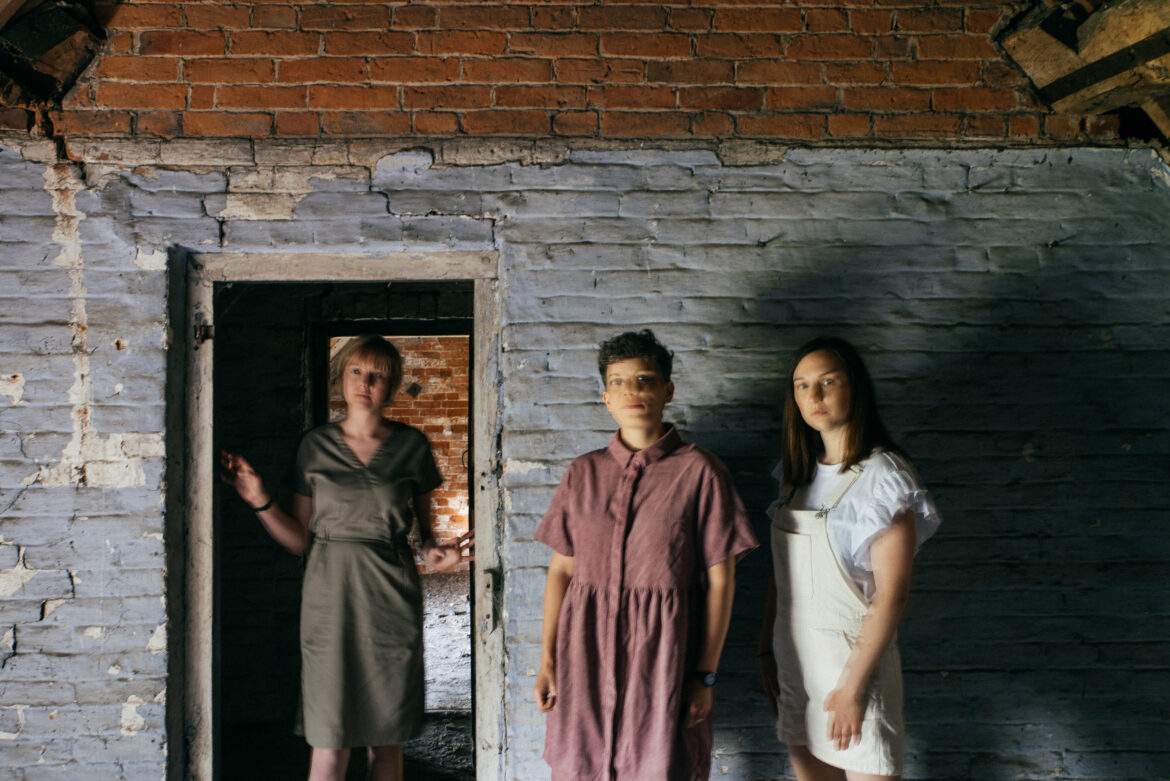 In the first sentences of The Haunting of Hill House, perhaps the greatest ghost story of all time, Shirley Jackson observes that ‘even larks and katydids are supposed, by some, to dream.’ If that’s so, then Haiku Salut could be said to have spent the better part of the last decade making the kind of music you might encounter in the mind of a dreaming grasshopper.

The trio of Louise Croft, Gemma Barkerwood and Sophie Barkerwood combine an array of electronics and classical instrumentation. Their superb 2018 album, There is No Elsewhere, wove ecological themes with euphoric moments of belonging, against an expansive backdrop of spectral wilderness. They followed this with the stony-faced, less-is-always-more melancholia of their soundtrack to Buster Keaton’s silent movie, The General. As a live act, they are highly recommended – flitting between glockenspiels and keyboards, trombone and percussion, the teamwork alone is captivating, and alongside their famous lamp show, in which an evolving collection of mismatched vintage homewares flicker in time with their musical antics, Haiku Salut are never less than utterly compelling.

For their forthcoming LP, The Hill, The Light, The Ghost, the band gravitated towards haunted places, making field recordings in derelict buildings. From one such space in Germany, amid the detritus of a pre-war urology clinic, they took samples from the ruins of a grand piano, a sound that formed the basis of the track, ‘Entering’, and set the atmosphere for the rest of the album. Whatever walks there, as Shirley Jackson might put it, walks alone.

The music makes a wide range of allusions – the aurora borealis, the eco-futurism of Richard Brautigan and the mass trespass at Kinder Scout all make an appearance – but The Hill, The Light, The Ghost, never strays far from the central conceit: a ghost walk through a series of long-empty rooms, none quite giving up its mystery.

We emailed some questions to Haiku Salut’s Sophie Barkerwood to see if she could illuminate matters.

CB: Where are you now and what’s the current situation?

Sophie Barkerwood: I’m currently sat in our dining room with a sleeping dog at my feet. We just got back from playing a festival in the South West – our first gig in 20 months and our first show with babies in tow. We’re about to release our fifth album and begin preparations for a lamp show tour starting in October.

The press release mentions your Tascam field recorder. For the benefit of our readers, can you tell us what that is and what’s your favourite thing about it?

It’s a portable microphone. You can record pieces of the world onto an SD card and then mangle and arrange and layer them into interesting sound pieces. My favourite thing is mixing up memories that are years apart and hearing how their qualities interrelate.

There’s a real beauty of track on the album called ‘Trespass’. Does that refer to your adventures in field recording?

A sketch of ‘Trespass‘ was written in a tiny chapel in Edale. We were invited by Jarvis Cocker to take part in a ‘cultural trespass’ which was an arts trail across the Derbyshire landscape. We set up on the pews for walkers doing the trail to stumble upon. The project was to celebrate the Mass Trespass of 1932 where industrial workers and working-class people risked their freedoms and ultimately gave us all access to the landscape. It was also a reminder that the landscape belongs to all of us and if we don’t fight we will lose it. It seemed obvious to us to call the track ‘Trespass‘ which also tied in with the wider theme of the record. Going places we shouldn’t and stealing sounds that don’t belong to anyone.

Once you have a field recording, how do you start to work with it? What is the process like? It feels like you might spend as much time listening to sounds as making them.

There is a lot of listening and sitting and absorbing, yeah. And tweaking, to get the best out of the recordings… sometimes you want to accentuate the crunchiness of a sound for example. In terms of the arrangement of the tracks, they all came together very differently. With ‘Entering’ we had a strong idea of what the track was going to be and it was built from the recordings up. Once we’d written the instrumentation we nudged the recordings into position.

There is No Elsewhere was concerned with landscapes and community, while this new album seems to explore time and memory. Was that a conscious decision at the start or was it something that emerged as you were working on it?

We didn’t know that we were going to use our recordings in a musical sense initially. I was given the recorder for my birthday about six years ago and we used to collect interesting recordings, memories really, like photographs. We took a lot when we went to Japan. I have a great snippet of a jazz bar – the same bar that the characters from Murakami’s Norwegian Wood go to. It wasn’t until about two or three years ago we realised that a lot of these recordings held their own magic and we were able to use their beautiful and wonky qualities to arrange our own music around. So in a sense, the album has been in progress for a long time but the emergence of the feelings of memories and loss didn’t come till later.

One of my favourite tracks on the album is called ‘All Watched Over by Machines of Loving Grace’. Were you thinking of the Adam Curtis films of that name or the Richard Brautigan poem about cybernetic ecology?

It’s taken from the Richard Brautigan poem, yes. I keep getting the book out of the library. I’m the only one who has checked it out in six years and it was lost between the years of 1985 – 2008. I’d love to know what happened there. The poem refers to a technological utopia where the machines free us of our work and we are able to reconnect with the landscape.

The track itself was written in collaboration with the Manchester Robot Orchestra and the title felt appropriate. We programmed the robots to do our bidding, there’s little chance of them taking over proceedings or developing the capability to look after anyone. I hear they’re in Winchester Science Centre now.

For all that the album is preoccupied with hauntings and things of a spectral nature it never becomes overtly spooky or threatening. Are you at peace with your ghosts?

I find nostalgia to be a difficult feeling. It can be tinged with sadness and I don’t like to dwell there too long. It’s not a spooky or threatening feeling but it is melancholic. We usually prefer to look forward rather than back but we found the process of sifting through the old recordings to be quite therapeutic. Like the memories were just floating around out there and now they have found their place and we can put the uneasy feelings to rest.

I understand that the album deals with metaphorical ghosts, but I have to ask: Have any of you ever encountered a ghost?

Not of the paranormal kind, no.

When you began work on the album did you have any preconceptions about what a memory might sound like?

Like an overplayed VHS tape on a broken machine. I’ve always loved how radically changing the time on delays mid melody makes the world sound like it’s melting, I used to push it until Louise said it made her feel sick.

It feels like all of your records so far have been building towards this one, with the sound becoming leaner and more complete in itself. Do we have Buster Keaton to thank for that?

The Buster Keaton live score was written over the course of two months. The deadline was really tight and we threw everything we had at it. Nothing was disregarded and every idea or sketch that was knocking around was used. We’re really proud of that album. It was the first record we recorded and produced entirely ourselves in our studio, and it gave us the confidence to do the same with this one. The intensity of the work took its toll in some ways and we came out of that project staring at a white wall. I wouldn’t say we had writer’s block as such but there was definitely a period where we were searching for new ways to approach writing. Which is where the field recordings played their role. I also think that Gemma has nailed her guitar sound on this record. She plays electric with a classical technique and the combination of pedals on her board really sing.

Are you looking forward to touring again and what can we expect when we catch up with Haiku Salut live?

Yes, very much so. We’re heading out on a Lamp Show tour in autumn. We’ll be starting the hunt for some new lamp friends soon! 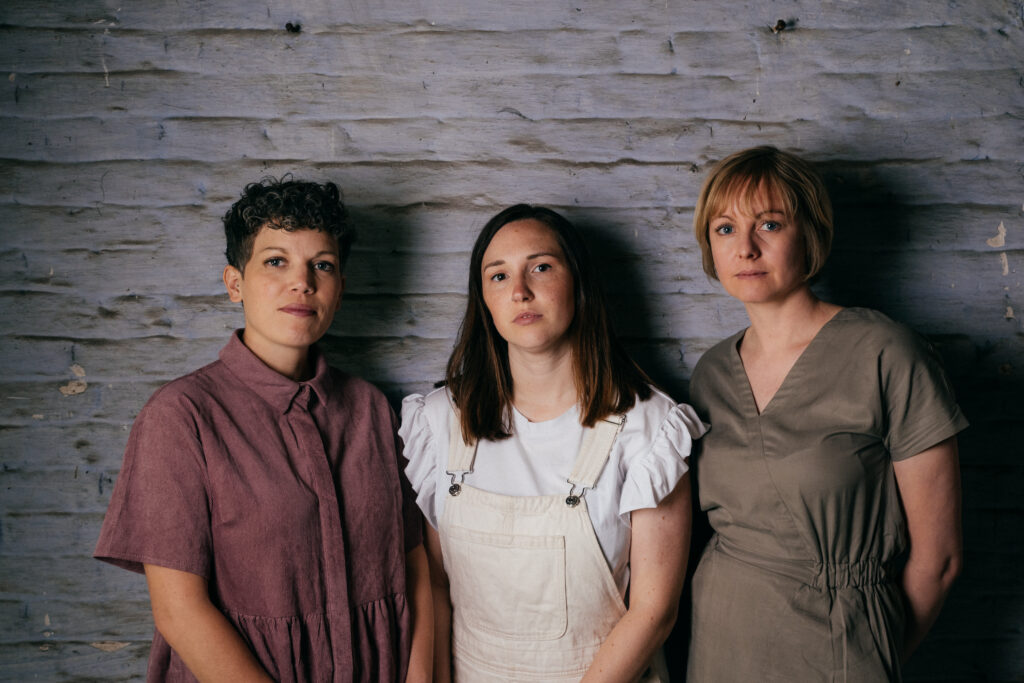 Haiku Salut’s fifth album, The Hill, The Light, The Ghost, is released on August 27th and is available here: https://howdoesitfeeltobeloved.bandcamp.com/album/the-hill-the-light-the-ghost