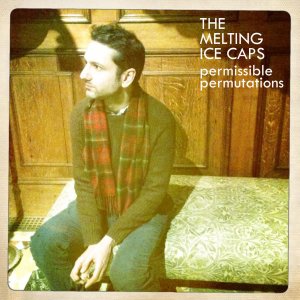 Finally, a full-length from The Melting Ice Caps.  David Shah has released some stellar singles over the years (all available for free at TMIC website), and last year saw The Strike e.p. (pay-what-you-want here), but now Permissible Permutations is a proper album, featuring some of Mr. Shah’s best songs to date. A sense of warmth permeates the record, in the voice and music as well as in the words, with songs such as ‘In Bloom’, ‘A Week Of Warmth’, and ‘Indian Summer’. Though it wouldn’t be the complete picture of life it is without some rain, literally in ‘Umbrellas’ and figuratively falling throughout others. Yet despite, and even during, this periodic precipitation, the sun always seems to be in view.

The opening 1:15 title track teaser offers a glimpse of what is to come. Humour and feeling intermingle in equal measure, highlighting Shah’s masterly way with words. Letter sounds pervade – “even now, you don’t see why, I…” – callbacks to the alliteration of the title and subject matter, culminating in the amusing “a b c, b c a, why?” I’ve noted before, in an interview with David here, how great lyricists have their own vocabulary, words and phrases that seem unmistakably theirs, and aren’t run of the mill in a pop song. The lexicon on Permissible Permuations includes ‘wisteria’ (‘In Bloom’), ‘piano fingers’ (‘Keep Both Hands Behind The Cutting Edge’), and ‘teleology’ (‘Ghost Writer’). But it’s not just the words that impress, the voice that sings them is also superb. One of the best voices in Pop today, full of the richness and warmth of the summer weather he’s singing of, and capable of capturing the finer points of emotion in its inflections. The music itself is both light and lush, composed yet aswirl with feeling, incredibly melodic and catchy.

Bittersweet reminiscence and philosophical longing combine in ‘In Bloom’. The recent live voice and piano version perhaps suits this tune’s breezy nature better than the full band rendition here, but that doesn’t take away from the fact that it’s simply a gorgeous song. There are hints of violence in the relaxed beauty of the next two numbers. Mutiny has never been so mellifluous as in ‘Keep Both Hands Behind The Cutting Edge’. And the wonderfully worded first lines of ‘A Week Of Warmth’ never fail to elicit a laugh, the song a lovely reminder that all sorts of living goes on during, but separate from, concurrent historic events, as here love and domesticity coincide with London rioting.

It is nice too that in these days of front-loaded records, that some still take the time to consider an album as a whole, with three of Permissible Permutations’ best songs coming at the end. ‘Join The Dots’ is exquisite, a heavenly pop dream, bearing a passing resemble to Roxy Music’s ‘More Than This’. ‘Indian Summer’ melts with the plush heat it’s fervently wishing for. And ‘Medical Advice’ is a fantastic cabaret closer. A military snare a la The Divine Comedy’s ‘Tonight We Fly’ ushers in a song facetiously flush with “maladies” yet melodically tempered with compassionate pursuit- think The Magnetic Fields’ more theatrical numbers only ten times better. Three of the best songs released this year.

These are songs of love, of having won through the wait the keys to express the fullness of what it has to offer when it comes. Abundant hope that what it has brought will stay and recognizing but refusing despair when it leaves all too early, these romantic rearrangements are a beautiful tribute to life’s abundant joys, sorrows, and solaces.