The Blueprints have been part of the fabric of the York music scene for a number of years now. A recent appearance at the Galtres Festival (pictured below) and past support slots to Space, The Lemonheads and The 1975 attest to this and also give a strong indication to the musical ballpark in which they play. The Blueprints possess the same fundamental pop sensibilities as those bands, an awareness to which they have welded a firm grasp of melody and the sheer exhilaration of being alive.

Their current incarnation – Stuart Allan (guitar and lead vocals); Mark Waters (bass guitar); Sophie McDonnell (keyboards and vocals); and Russ Broadbent (drums) – has been on active Blueprints’ duty since 2010 and The Mountaineer is the successor to last December’s 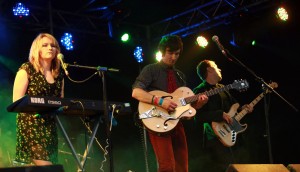 debut EP, The Shipping Forecast. In keeping with that release, The Mountaineer presents a central lyrical theme. This time the sea has been replaced by nature in general but what remains within the music is that same innate sense of space and being in the great outdoors.

The opening ‘Laws of Nature’, with its incessant urge and the most contagious of choruses signals the record’s true intent; to percolate into your consciousness and fill you with unbridled joy. It distils happiness into two hundred and twenty five seconds of quintessential pop music. Despite its title, ‘Another Breakdown’ is a further example of how to best marry the delights of harmony, chorus and melody to most dazzling effect. ‘Echoes’ glides effortlessly along a similar flight path; the one that has defied the listener from the very outset to somehow not tap their toe to the rhythm of The Blueprints’ wildly infectious pop jangle. The introduction to ‘Skeletons’ nods in the general direction of Neil Young and one of the band’s undoubted influences (The Beatles, Tom Petty and Evan Dando can surely be listed amongst others) yet through the freshness and vitality of their sound The Blueprints somehow manage to avoid falling through that perennial trapdoor of merely replicating the music of others. The concluding ‘Icebreaker’ shows that they can do gentler reflection too, capturing as it does the changing physical complexion of the world and in so doing forges a link back to The Shipping Forecast.

In concert, The Blueprints exude happiness, comfort and joy, emotions they have managed to transport into the studio and etch deep into the grooves of The Mountaineer. It is a vibrant, expressive record, one that will hopefully relocate them from the confines of North Yorkshire and onto a much bigger musical map. If you have an hour to spare, put this record on repeat and play it three times back-to-back. I guarantee you it will be time well spent.

The Mountaineer will be available on CD and download from 14th September 2013. To launch the EP, The Blueprints will be performing that night at Fibbers in York. They will be joined at the launch party by The Lottery Winners, Bull and The Buccaneers.

On release The Mountaineer can be heard/bought here: