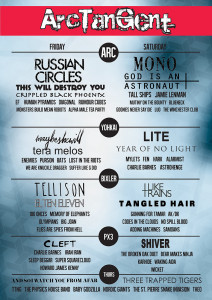 Those of you that took a punt on the inaugural ArcTanGent last year will no doubt testify to its large success, putting together the well enjoyed cosiness of 2000 Trees with a brand of music that is dearly subscribed but largely underserved in even the most saturated festival market. The little two days and an evening gathering can even claim to the best portaloos in the land now, having grabbed the much coveted prize of Best Toilets at the 2013 UK Festival Awards (I should also add that ArcTanGent was nominated for Best New Festival and Best Small Festival as well).

A good first crack at it, by anyone’s standards. “We hadn’t pre-empted just how friendly everyone was going to be”, organiser Goc O’Callaghan explains. “We also hadn’t factored in the overseas guests that we had come along, so it gave the festival an international flavour. Public Service Broadcasting sampling ‘ArcTanGent Festival’ into one of their songs was unexpected, and then getting a radio call to tell me ‘your mum is in the pit for Rolo Tomassi’ certainly came as an unexpected surprise.”

“This year we have bands from Japan (Mono, Lite) and the USA (Russian Circles, Tera Melos, 100Onces). We also have some UK and European exclusives as well. It’s a big leap for us in terms of the line up.”

“I’ve unintentionally managed to miss Alpha Male Tea Party about three times now so they’re on my must see list. Ef I have been listening to a lot lately too so I’d like to see those guys. I’m also going to cheat a bit here, Human Pyramids are a must see. I did see them at Great Escape but they are so overwhelming awesome as a live show you need to see them more than once. Don’t miss them, what Paul Russell (of Axes fame) has come up with is truly something magical.”

Is another new festival now on the cards? “Actually now you mention it, yes I’m working on a new festival called Festivalism which is due to come to the South East of England in 2016. It’s going to be very different from ArcTanGent but certainly a festival that will appeal to real music-heads, foodies and party animals who like a chuckle!”

ArcTanGent takes place at Fernhill Farm near Bristol from the 29th to the 31st of August. You can find out more at arctangent.co.uk.