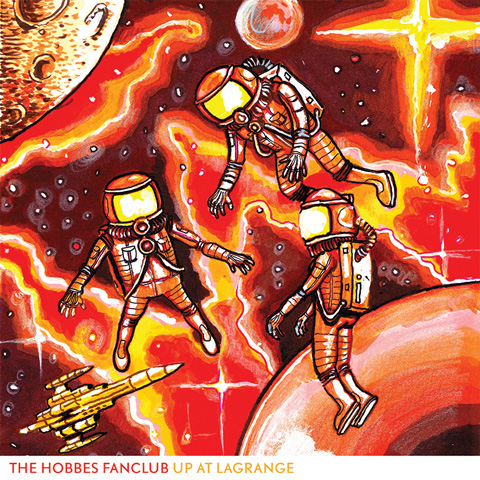 Having waited years for the arrival of their début album Up At Lagrange, within a matter of days The Hobbes Fanclub have now also unveiled a brand new video. A suitably understated hand-held camcorder snapshot of the band as they visit les attractions touristiques de Paris, the video is a delightful accompaniment to ‘Stay Gold’, the second track on the new record.

The video footage follows the intrepid Bradford trio of chief songwriter, guitarist and vocalist Leon Carroll, bassist and fellow singer Louise Phelan and drummer Adam Theakston as they first take in the familiar sights of the Sacré-Cœur Basilica and the French capital’s sun-kissed skyline before heading off in the direction of the Arc de Triomphe de l’Étoile and the Champs-Élysées.

The vintage family holiday feel of the video is matched by the nostalgia of The Hobbes Fanclub’s music. ‘Stay Gold’ is a bold slice of chiming power-pop that surely has its nascence in the early ‘90s. Its incessant, jangling guitar melody and irrefutably catchy vocal harmonies owe much to those Big Star aficionados from Bellshill and men with whom they share half of their name, Teenage Fanclub.

On Up At Lagrange, and when placed upon the glorious platform of guitar noise generated by Carroll, the male/female amalgam of his and Phelan’s voices brings to mind the light and shade that My Bloody Valentine contrasted to such dizzying effect on their second album Loveless. By combining these reference points, The Hobbes Fanclub will never be marked out as true sonic pioneers. But the manner in which they produce their euphoric and wistfully crafted songs is still a thing of quite reassuring joy.

Up At Lagrange was released on 19th August 2014 through Shelflife Records. Available on both vinyl and CD the album can be purchased HERE