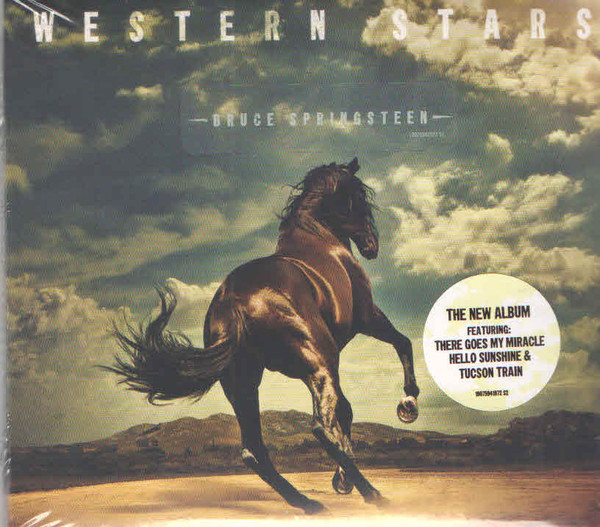 Practically every time Bruce Springsteen has released a new album in the past 25 years, countless glossy mags and over excitable music hacks of a certain age exclaim it to be “The Boss’s best record since Nebraska!”

I was determined not to fall into this predictable trap. Except that…well…it IS his best record since Nebraska. Yes folks, New Jersey’s most famous son, on the advent of his 70th birthday, has released a long player that is conceivably one of his five finest works EVER.

Whilst sonically, the aforementioned Nebraska is its touchstone, Western Stars feels altogether more optimistic. The yearning is still there, sure, but unlike the seething beast of 1982, here there is no ominously underlying sense that something sinister is afoot. Simply put, this is Springsteen doing what he does best – huge sweeping melodies that conjure up impossibly majestic American landscapes of canyons, mountains and clear blue skies, its characters often escaping into, or finding solace in, the great wide open, a recurring theme throughout the standout periods of his back catalogue.

The opening gambit of ‘Drive Fast (The Stuntman)‘ is the most Springsteen lyric you could ever imagine: “I got two pins in my ankle and a busted collarbone / a steel rod in my leg, but it walks me home” proving he has lost none of his poetic genius nor his ability to tug gently at your heart strings. By the time we’ve got to this point though, we’ve already had it made abundantly clear to us that Western Stars will be taking us on an epic journey. ‘Hitch Hikin‘ is a quietly affecting ode to the open road, ‘The Wayfarer‘, like several of the tracks here, recalls the classic American tv themes of the 1970s, such as ‘Tucson Train‘ which may well be the finest composition in the Springsteen canon from the past three decades. It’s undoubtedly the most romantic, at the very least.

‘Sleepy Joe’s Cafe‘, meanwhile, sits more in the saddle of The River‘s rare moments of gentle shimmy, like a cross between that album and The Mavericks, featuring the kind of world to which we’ve become accustomed, as fans: “There’s a place out on the highway ‘cross the San Bernardino line / where the truckers and the bikers gather every night at the same time.” Of course, all the extras in these songs are painted with such vibrant colours that, despite knowing that this particular establishment is more than likely filled with characters from the city’s seedy underbelly, it’s impossible not to fall in love with it. In fact, if there is ANY criticism to be made, the only thing that comes to mind is the great man’s dropping of the letter “h” when singing the chorus of “Chasing Wild Horses“, which makes him sound like Dick Van Dyke in Mary Poppins and can become grating. But only if you let it.

You will no doubt already be aware of the incredible Walker Brothers meets Roy Orbison grandeur of ‘There Goes My Miracle‘, but perhaps the track that follows it, ‘Hello Sunshine‘, gives us the biggest clue as to how Bruce Springsteen came to create such an astonishing record: “You know I always liked that lonely road / no place to go and miles to go.” The Boss has been embarking on his own personal journey ever since I was a toddler. It seems he may have inadvertently – or maybe even completely intentionally – returned to the destination that inspires him the most.

Western Stars is simply a staggering record. One that few of us could have anticipated Springsteen was capable of, this late in his career. If I was a musician starting out now, and heard this album, I think I’d just hang my guitar up in defeat.

Western Stars is out now on Columbia Records.