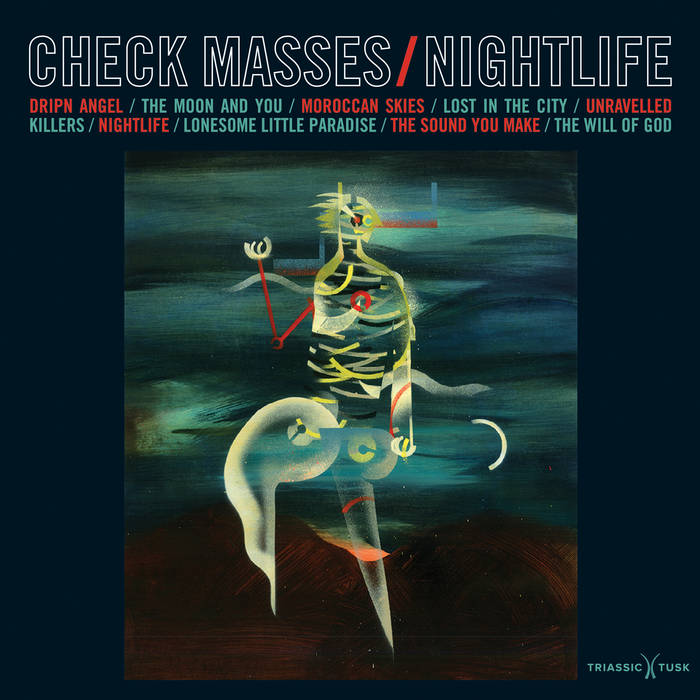 When you’ve been reviewing for a number of years, it’s possible to get ever so slightly (well, actually quite a lot) cynical and jaded. Press releases that promise a divine mixture of far-flung influences that are inaudible on an instantly forgettable record that sounds like a fifth-rate Coldplay.

Edinburgh’s Check Masses are not a band like many other bands, or indeed, trios. They are singer ‘Philly’ Angelo Collins, producer Saleem Andrew McGroarty and multi-instrumentalist Vic Galloway. North of the border here in Scotland, Mr. Galloway is something of a radio figure in the vein of John Peel or Steve Lamacq, with his radio shows offering many artists and labels their first exposure (as someone who used to run a tiny label that got supported by him I can vouch for this). In fact, if he hadn’t been responsible for this album, I’m pretty sure without going out on too much of a limb, that Check Masses are exactly the sort of band he would get behind.

When the first single ‘Dripn Angel’ (sic) arrived at the start of the year, it managed the rare feat of actually living up to the press release. Truly here was a first single that actually did mix TV On The Radio, Ennio Morricone and Massive Attack, and used them as the starting points, rather than an end in themselves. The track shimmers and prowls in a manner similar to Folk Implosion’s ‘Natural One’. Of course, the days of one track alone being sufficient to part with your hard-earned cash are long-gone in an era of both streaming and COVID-19, so the album needs to live up beyond that.

Which it does. Highlights include the shuffling ‘Lost City’ which feels and sounds like a swagger through London or Edinburgh’s cooler parts at night. It’s based on a David Axelrod sample that McGroarty heard and headed off in search of Bowie circa Young Americans. ‘Moroccan Skies‘ is based on Philly’s experiences of wandering North African streets, and the title track explores the nightlife history of Edinburgh, warts and all. It’s impressively put together enough that there is light and shade on this album, as provided by ‘Lonesome Little Paradise’ and album closer ‘The Will Of God.’

This is the sound of not just a multi-cultural Scotland, but a multi-cultured world, and seriously cool record collections. An album that transports you away from wherever you have spent the past few months unable to move. And one of the best albums so far this year.

Nightlife is out now on Triassic Tusk Records.