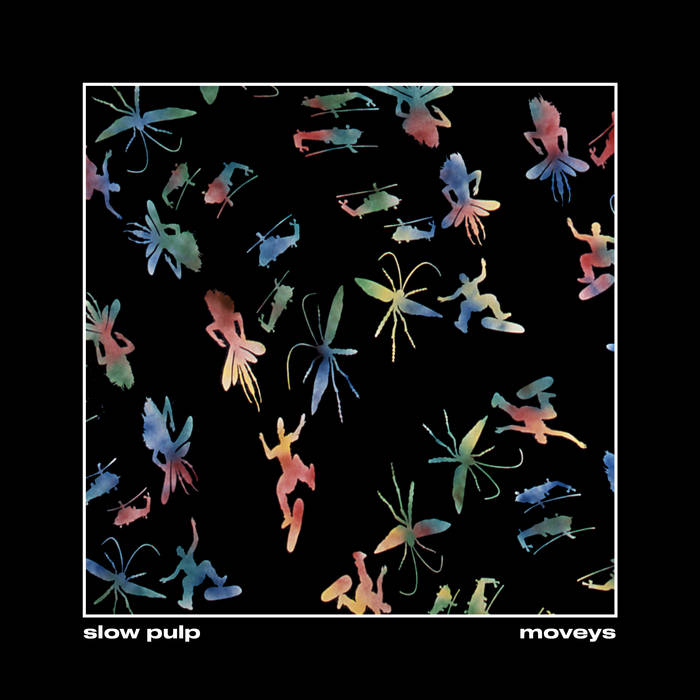 According to the press release that accompanies this album, Slow Pulp have been having quite a time of it recently, especially vocalist Emily Massey who has not only suffered a bout of Lyme disease and chronic mono recently but also received news that her parents were both involved in a car crash prior to COVID-19.   All terrible things.  Thankfully, the band has a new album out which isn’t terrible at all.

Should you happen to be a fan of any genres such as shoegaze, dream-pop, alt-indie, soft grunge and dare I say…country, then there is absolutely something for you here.  Moveys is Slow Pulp’s first full-length album, having put out a couple of EPs (Big Day and EP 2) and singles prior to this (‘Steel Birds’ and ‘At Home‘).  In light of the band’s previous releases, Moveys aligns with the precedent set on these.  Expect catchy hooks, dreamy melodies, irresistible loud and quiet moments, crashing waves of sound combined with sweet harmonies and self-deprecating lyrics.

If this album were a person they’d own a plaid shirt, probably have a copy of the point and click adventure game, Life is Strange (in fact, Slow Pulp really sound like a band who’d fit on a LIS soundtrack), and enjoy taking pictures on retro cameras.  Not gonna lie – I am actually this person so ummmm yeah, it’s no wonder this album speaks to me.

’Idaho’ is the single release from Moveys and it’s a fine choice, as this song represents their sound best out of the ten tracks.  It begins with a neat little harmonic before breaking into a full-bodied, soft-grunge riff, you get about 32 beats of this before Massey’s unassumingly perfect vocals are introduced.  “I hate the sound. They’ve all been used by now.”  Structurally speaking the song doesn’t vary that much but it doesn’t need to, they have a great riff, they use it, they build it and it works.  The chorus is a fun anthemic thing (“I’m mooooving on”) which we get a few rounds of before the songs flickers out just as neatly as it began.

There is an accompanying video to this song on YouTube which features some spinny artwork against a black background.  I probably wouldn’t have mentioned it but after reading the comments underneath the video I can’t let Keegan Lynch’s acute observation go unmentioned.  As he notes, ’Aw man I haven’t had an experience like this since being chonged in my high school bedroom watching the classic iTunes visualizer.  Thanks, Slow Pulp!’  It is really like that, so if youre in the market for some iTunes classic visualizer nostalgia then do put some time aside to enjoy this video, you’ll really get a kick out of it (chonged or not).

A song called Track leads on from Idaho which could have easily been another strong contender for a single release.  It crashes into another chunky riff punctuated with My Bloody Valentine feedback that works into the song as melody.  Despite being new, it sounds as though it’s a song you already know and love.  This is kind of a repeating theme on the album, Slow Pulp seem to possess a special formula which works to create music that sounds so comfortably familiar.  Even when listening to them for the first time, you get a warm fuzzy feeling, like the minor elation you feel when you’ve just bumped into a good friend you haven’t seen in ages.

The song Whispers (in the Outfield) is an instrumental piano ballad that acts to break up the tone of the first part of the album and the latter few tracks. Both Falling Apart and Montana sound as though they’d be at home on a Saddle Creek compilation, its a change in tone from the previous songs that are all comfortably soft-grunge/shoegaze vibes but not an unwelcome one.

Kudos to the band for ending the album with a short, quirky, hip-hop outro track (named after the album title) that 100% sounds as though it’s from the Dreamcast rollerblading game, Jet Set Radio.  I only hope that they pursue this experiment further  maybe a whole album of this as a side project with more videos reminiscent of early noughties, obsolete tech trends.

Since Moveys has an undeniably 90’s American high school movie sound it seems apt to refer you to Travis Birkenstock in Amy Heckerling’s seminal film Clueless for final thoughts:

Moveys is released on October 9th, via Winspear.