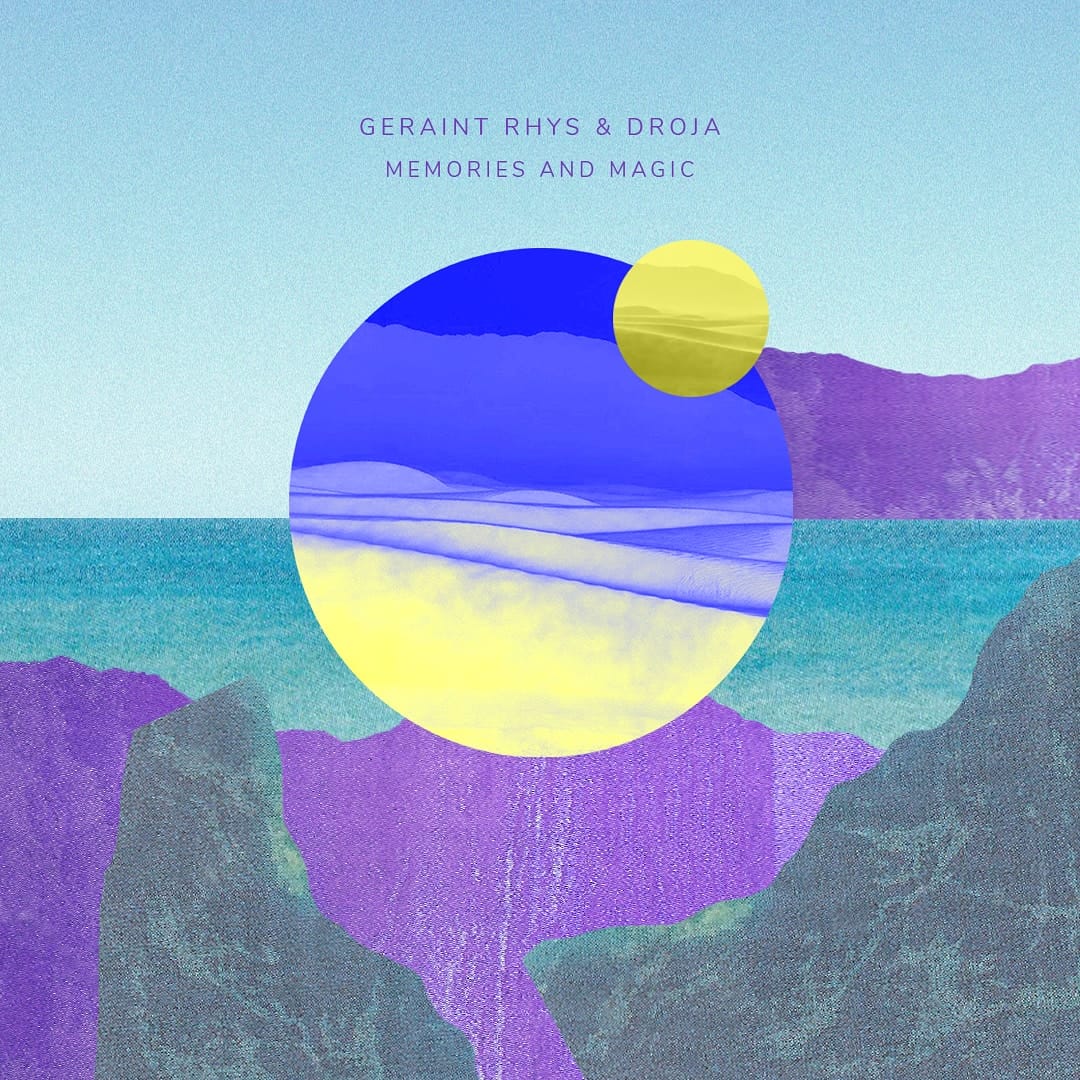 On first glance – or listen – a musical project from the combined forces of singer songwriter Geraint Rhys and electronic producer Droja is an abrupt clash of cultures. And yet quite delightfully,  debut single release ‘Memories and Magic’ is the sound of a summer we’ve all been waiting so long for, pairing electro-pop and a infectious earworm of a vocal hook with shades of something darker.  Described by BBC Introducing’s Adam Walton as a record of ‘real life affirming joy‘, it’s a balance of a minimalist musical bed from the mysterious Droja, and Geraint’s repetitive and catchy singing. For someone with such a big and expressive voice it must be tempting for Rhys to let it rip but instead we feel the benefit of his admirable restraint.  It’s actually very hypnotic.
We’ve had minimalist music on his recordings before, so this is not entirely new. ‘Time We Grow‘ from earlier this summer is acapella, and last year’s  wonderful atmospheric ‘Dianc‘ was stripped to the bone. On ‘Memories and Magic’, the duo explains to me the approach was to use Geraint’s voice as part of the musical arrangement in itself.
‘I think we’ve always tried to treat Geraint’s vocal like an instrument, and sometimes you loop an instrument, it’s playing similar rhythms or similar melodies,’ says Cardiff-based Droja, who comes from a techno background. ‘You have a very peaceful sort of string that comes in at the beginning, and then, you know, we just thought “what if we start playing with the vocal”. We chopped it up and sampled it.’

Swansea-based Geraint comes from what he describes as a ‘very jamming musical background’, with his first instrument being the drums. It’s interesting as well that Geraint has a long standing passion for French house, so the logic of the twosome working together becomes ever clearer. The things you find out on a Wednesday evening over Zoom. ‘I used to play drums with a bassist, we used to jam like Flea and Chad from Red Hot Chilli Peppers,’ he laughs. This new project – new as in about two years in the making – came from the pair jamming together and taking things from there.  Their first session at the Music Box in Cardiff Geraint describes as ‘an intense off the cuff. Musically I suppose my own stuff is more traditional,’ he concedes. ‘I’ve always loved electronic music.’
‘Often he’ll come up with these cool ideas, because he’s a really amazing pianist,’ Geraint says of Droja. ‘And they’ll then be turned into something electronic. I can riff off everything he does. We’ve got more things to come in the pipeline. It’s quite natural to me to riff vocally off whatever he’s come up with.’
Memories and Magic has that magical balance of melody and melancholy, it’s that sense of bittersweetness gives it the edge.  There is a good time hanging out with friends in the summertime vibe to it for sure, but deeper depths in there.  Droja cites the ‘I like beautiful melodies telling me terrible things’ Tom Waits quote. ‘I think it’s that juxtaposition, that sort of contrast that in any song is what makes it enjoyable, I think. We never write strictly sad songs or strictly happy songs, there’s always this element of both, there’s always been clean and dirty. There’s some strains of distorted percussion through the back, and it’s really beautiful vocals on top of it, you know, so it’s nice to kind of sandwich things together,’ he says
‘It’s not quite electronic meets Morrissey,’ jokes Geraint. Yikes. This year’s new genre – first chamber psych, now this.
The duo worked the songs remotely in more recent months, having studio access withheld over the past year or so has been a plus, offering the opportunity to experiment.
‘It’s definitely given the ability to try different genres. There are no barriers…say for example if you go to the studio and record a song, you have a finite amount of time, which costs money. It’s okay right, you’ve got a day to be in the studio recording guitar and recording, basically. But what if I want to try some electronic program on my laptop? So what if I just want to strip everything back?’
The vocal for ‘Memories and Magic’ and additional tracks recorded at Parr Street in Liverpool, the two men jammed and worked on the tracks in a dusty room in the Coal Exchange in Cardiff is one place leaving its mark.  Long six or seven hour long sessions at highly unsocial hours. ‘We were squatting basically. Like ghosts….’
‘And yeah, you sort of came out and oh the sun’s coming up, and then we’ve been here all night, all day, and now it’s the next day again,’ recalls Droja.  Geraint and Droja don’t share too much detail of what they have planned for the project but there’s ambient stuff to come, other tracks more dancey and techno . ‘We’ve got lots of new stuff. That’s the downside maybe to being a jam bass sort of project is that you have hours and hours of material, you still have some of the recordings from our first jam I still haven’t actually finished wading through because they went on for half a day…’

‘Memories and Magic’ is out now.