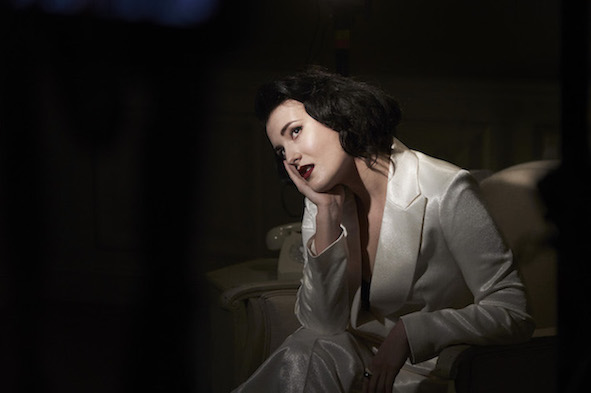 Seven years is a long time to go AWOL from the music business. Duffy, on her own admission, couldn’t handle fame and disappeared in 2011. In the same year, a 20-year old woman from Salford, Ren (short for Lauren) Harvieu, who had the same producer as Duffy – Jimmy Hogarth – and who had signed to Universal aged just 18 after being discovered through demos on Myspace, started recording an album.

Then, in a freak accident, she broke her back, underwent a 14-hour operation which saved her from a lifetime in a wheelchair, or worse, and spent many months recovering under specialist care.

The album, ‘Through the Night’ released in May 2012, reached number five in the UK charts. Four singles were released from it, including the title track and what is probably her best known song, ‘Open up your arms’ though none of them achieved chart success.

Even so, the future was looking bright for Harvieu. But the accident had clearly had a deep psychological effect on her.

I saw her perform on one of two nights at Soup Kitchen, Manchester in December 2015 when she put on a ‘Christmas Special’, one of the last occasions she performed live as a headline artist.

It was a strange evening in many ways. Before the show I watched a performance on You Tube from The Lowry Theatre in Salford from 2012 and read some damning comments about the perceived weakness of her voice. But on the night it was strong and positive and I wondered if the Lowry show had just come too early for her.

But there was something else that wasn’t right. There was still an emotional tenderness there. Several times during the show she hinted at things that had been holding her back during the previous couple of years. She was especially vitriolic about the many people who had been “telling her what to do.” Then she delighted the audience with a story about a school choirmaster, who had prevented her joining the musical assembly on four occasions for no better reason than that there was something about her he didn’t like. Her rejoinder to that: “Well, fuck him.”

She delighted them even more with news that a second album was in the making, that it would signal a dramatic change of direction, and that we would be treated to some tracks from it on the night. Even then it had been a long time in the making. The Manchester Evening News reported she had begun working on it as long ago as September 2013.

But then she became morose again. Introducing a new song, I think it was called ‘Painful’, she spoke about asking herself “is there something wrong with me” and questioning if she could “take it anymore.”

That show featured a variety of Christmas songs, including ‘A Fairytale of New York’ in which she reversed roles and changed the lyrics to “I could have been someone; I will be someone”.

Also,  ‘Have Yourself a Merry Little Christmas,’ a song beloved of Sinatra, Judy Garland and Sam Smith to name but two musical greats.  I wrote at the time – There’s no reason why Ren shouldn’t be up there with Frank and Judy one day.

But then nothing, she disappeared like a character out of Coronation Street, never to be heard of again. When I reviewed her fellow Salfordian Elkie Brooks (who is from the same suburb, Broughton, there must be something in the bitter) at the Lowry earlier this year I wrote, “I started to muse over Broughton’s other female chanteuse of great, if passing, repute, Ren Harvieu, who thrust herself on the nation in 2012 with another voice to die for and has barely been heard of since. Elkie can’t go on forever…and needs a successor. Lauren, wherefore art thou?”

Well, would you Adam and Eve it, here she is, entering stage left, like Toyah Battersby or any other  rover returning to Coronation Street. Out of the blue, there’s a single, and confirmation that album will finally be released, in spring 2020, on Bella Union. Not only that she’s touring, kicking off gently at the Reeperbahn Festival, which has just started (a good choice, the crowds are always sympathetic there), followed by two dates in the UK, in October.

According to the PR, the album “is a brilliant, bolder and broader take on her timeless pop classicism, a compelling diary of a struggle with self-belief and a celebration of liberation and survival.”

The single, out now, is ‘Teenage Mascara’ of which Harvieu says: “I see ‘Teenage Mascara’ as a dance between the many versions of ourselves. The woozy, dreamlike intoxication of the music helps swirl those emotions we sometimes have where we can go from feeling like sultry sex kittens to being bedridden with despair and greasy hair. I think it’s important to celebrate it all, the sass through the tears, the vulnerability behind the makeup.”

If that doesn’t describe Ren Harvieu I don’t know what does.

For those who never saw her live, or who missed her earlier recording career, if I was pressed for a single reference point, a ‘For Fans Of’, it would be Dusty Springfield. I can’t give a better recommendation than that.