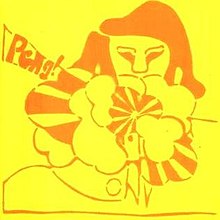 In the mid-1990s ‘retro’ became the new ‘new’. As Britpop turned the obvious 60s influences in big pop hits (again!) an altogether more interesting strain of retro-futuristic music mined the outer-reaches of pop such as proto-electronica, easy listening, krautrock, ye-ye pop and exotica. Arguably, the best proponents of this genre-exploring, rule-breaking was Anglo-French collective Stereolab.

Off the back of the rarities reissues earlier this year, their 13 albums are getting the reissue treatment, starting with 1992 debut proper Peng! an album named after a German onomatopoeia and the first sonic inkling of what the band would become.

Hitting the ground running from the moment Tim Gane (following the demise of his old group McCarthy) and Laetitia Sadier joined forces in 1990, by 1991 their early drone-rock, shoegaze singles and EPs were making the firm favourites in that scene. Despite the quality of those releases, at this point, there was little to stand them out from the pack, with only minor glimpses of what was to come.

Peng! was the breakthrough, a calling card for a band that refused to be easily defined and a modish, psych wonder that somehow sits comfortably in with the ‘indie’ of the time whilst openly thumbing nose at it. ‘Perversion’ for example, removed of Sadier’s sing-song vocals, could slip on any pre-Britpop UK indie dancefloor alongside the grebo and baggy tunes.

Where earlier work had displayed glimpses of vintage synth pulses, crushing drones and French pop playfulness, Peng! is where Stereolab start to gain real confidence in pushing the boundaries. In doing so they redefined the very nature of experimental music making it as accessible as it was challenging, creating a sonic cloud of pop harmonies, discordant avant-guard structures and dark melodies that tread the line between sinister and lovely. Who else in the ‘indie’ scene was even using a Mellotron, never mind to such beguiling effect?

Where later excursions into easy-listening, electronic experimentation and sheer weirdness saw many people put off, what Peng! does so wonderfully is create a coherent sound that ‘fits’ the time of its release and manages to be timeless as well. In much the same way The Fall managed to be ‘always the same, but always different’ such is the situation with Stereolab’s early releases.

The hushed rendition of a Charles Baudelaire poem on floating avant-tune ‘Enivrez-vous’ shows that the band weren’t scared of lofty, conceptual ambitions. A fact that would lead to much interpretation of their lyrics – both politically and culturally – with no one ever quite getting a handle on the band’s imagery and meaning.

When it comes to Stereolab Peng! is an accessible entry point that can act as a wonderful game of spot the influence. It is the sound of disillusioned rock musicians seeking a new sound, achieving that and having one hell of a time doing it. Essential stuff.