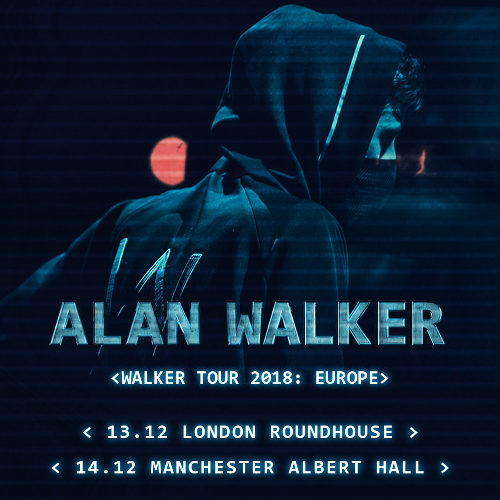 So, two excursions outside my comfort zone in a matter of days. The first one for two hours of metal, and now for a couple more of EDM.

I felt rather privileged. This is the first time I’ve seen someone who has the 25th most-watched YouTube video of all time (currently 2.13 billion hits). And looking at those in the list above it (examples: Ed Sheeran, Taylor Swift, Maroon 5, Psy doing his Gangnam thing, and the biggest of all,  Luis Fonsi’s dreadful ‘Despacito’) I’m sure Alan Walker’s ‘Faded’ is far better than all of them, both musically and visually.

But how much more than ‘Faded’ – which went platinum in 10 countries – would the British/Norwegian Alan amount to in this live show, performed just 21 hours after the release of his highly anticipated debut album, Different World, with numerous vocal collaborations?

Alan Walker is an ideal representative of the 21st century phenomenon of the musician who comes out of nowhere to set the world on fire. The black kid on probation in Watts recording a rap track on his phone for example. Or the female orphan in a dank suburb of Vilnius, doing the same with a bit of grime. The next thing you know it’s online, explosive, and everywhere.

Alan Walker isn’t even formally trained as a musician. He isn’t one of those types who were made to play piano at the age of three by a school music teacher mum or guitar by a frustrated dad whose own rock band didn’t make the grade. His path into the industry was one of computer programming and design, allied to his interest in Electronic Dance Music and film music composition. Aided by YouTube tutorials he wrote music on a laptop in his bedroom and traded under the name DJ Walkzz. Even now he’s more of a producer and DJ than an artist per se.

For those reasons, his off-piste background and his meteoric rise to fame on the basis of one song without a supporting catalogue to speak of, I think it’s fair to say that the music press has been waiting with knives sharpened for his album.

I managed to listen to it once before the show (and several singles had been released prior to the album of course). It isn’t at all bad, an amalgam of modern day dance styles, and I reckon it will grow on me. Alan Walker obviously has an ear for the sort of infectious melody that record companies know will sell big, which is why he got a record contract at the age of 18. Some of them, ‘Sing Me To Sleep’ for example which is voiced, like ‘Faded’, by Iselin Solheim, and which was released as a single two and a half years ago, are noticeably similar to the mega-hit, while others are quite different.

The title track for example, a collaboration with Shanghai’s rising DJ and producer CORSAK, is an electro-pop standard while others are pure house, or introduce non-European rhythms and ‘Lost Control’ features the Sia-like vocals of Sorana.  And there are various ‘interludes’ which are quite hypnotic. The opening track, ‘Intro’ has the instantly attractive (though again ‘Faded’ – derivative) melody that suggests that it should have been expanded well beyond its one minute 16 seconds.

While none of the other tracks come close to matching ‘Faded’ there is plenty here to suggest that Alan Walker is most certainly no one-hit wonder.

The crowd that turned up for the second of Alan Walker’s two-show UK tour was the most cosmopolitan I’ve seen at a British venue. Almost half of it (of around 1,800 in total, I’d estimate) was of Chinese origin, followed by Latin American, Middle Eastern and even grungy Eastern Europeans.  It was therefore no surprise to me to find that Walker was heading off from this show to Korea, then Japan, India and China for a New Years Eve festival before making his way to the U.S. in January. This is a global artist, make no mistake.

I said earlier though that he is more of a DJ and producer than an artist and that is particularly evident in his live performance. He stands alone before his deck, only partly visible for most of the time on account of a non-stop, dazzling light show that turns him into a flickering silhouette. You are only vaguely aware of a masked man in black who could be the Lone Ranger, twiddling his knobs and switches, or otherwise constantly moving his hands to sign-language the words to the songs while perpetually shuffling his feet.

The one constant in that light show is his by now universally recognised symbol or logo that consists of the intertwined letters A and W. The giant symbol that his plinth stands on lights up every few minutes like a form of subliminal advertising to remind you of whose presence you are in and you cannot escape the feeling that you are in the midst of a huge marketing branding campaign. Around you are almost exclusively young people (I saw hardly anyone apparently over the age of 30), many dressed in black hoodies bearing that same A/W amalgamation. There is even the sense of being at a political or religious rally at times; such is the intensity of the message (although I should add that it is a thoroughly altruistic one).

Indeed Alan Walker is a virtual artist on stage just as there are virtual airlines, currencies and other such services. Throughout the entire 90-minute show no live music is played as such. On one occasion a male/female vocal/dance duo (I didn’t catch their names) performed one of the songs and on several others a couple of young lads who could have been Jedward from where I was perched right at the back of the mezzanine came on to dance, sometimes effectively, other times in a somewhat un-coordinated fashion.

The set itself was fundamentally a DJ/remix one (which we’d already had from warm-up support Dynoro) interspersed with tracks from the new album. In some ways it was like a typical Albert Hall club night. I found that a little surprising. I’d have thought that an artist releasing his first album and under searching scrutiny from the meeja would have majored on that album. As it happened, the first song came around ten minutes in and 50 had passed before ‘Fade’, the predecessor to ‘Faded’, cropped up.

I recalled that even the Albert Hall had played down the event, referring to Alan impassively as “a Norwegian DJ” or something similarly unimpressive.

On the other hand those remixes were what really got the audience going and quite a few of them fell into the “umpa, umpa, stick it up your jumper” chant category. In contrast, while the album tracks were generously received, notably ‘Different World’ and ‘Sing me to sleep’, the applause was comparatively muted.

However, the deafening roar that came up when the first bars of ‘Faded’ drifted out of the speakers you’d have been forgiven for thinking that Mourinho had thrown Bobby Charlton on as a last-minute substitute at Old Trafford to score the goal that saved United from relegation and prevented City from winning the title.

Actually it sounded a little tinny played at volume but as usual it was spine tingling.

I left confused as to what type of performer Alan Walker is and where he goes from here. Is he a DJ/producer or is he a creative artist in his own right? The album says the latter but the live performance says the former.

Try as I might to avoid comparisons I can’t avoid one with the young Dane who styles herself as Lydmor, and who I watched, along with 40 other people, at The Castle here, a couple of weeks ago (and one of the finds of 2018 in my view). Her music is similar to that of Alan Walker; at least there is a dance element to it. The differences become evident on stage.

While she does not play an instrument live either, relying on the programming of her laptop and that of her sound man, she does three things Alan doesn’t. Firstly she actually sings the songs; secondly, she comes into the audience and otherwise reacts with them visually. Thirdly, she presents a human image (she has even performed almost naked apart from body paint), rather than hiding behind a mask and a brand.

Indeed, if you read this Alan, you wouldn’t do yourself any harm by seeking her out for some collaboration.

While I would not like anyone, especially Alan Walker’s fans, to think I didn’t enjoy this show – I did – I can’t help but think how much better it would have been if for example Iselin Solheim, who is trying to establish her own solo career now, had been there in person to deliver ‘Faded’ and perhaps some other songs, live down a mic.

Alan Walker at his best: a performance of ‘Faded’ with the Norwegian Radio Orchestra. The singer here is Highaskite’s Ingrid Helene Håvik. The introductory music is ‘Sing Me To Sleep’ with Iselin Solheim.