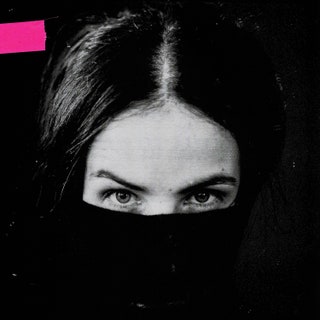 The Ela Minus manifesto has been unleashed to the public. 10 tracks, 41 minutes long. Every day you’ll face challenges and obstacles (whether mental, physical or societal) that will attempt to break your confidence or slow you down but Brooklyn-living Colombian expat Gabriela Jimeno has released a techno-pop record (under the Ela Minus moniker) that encourages listeners to show defiance in many different aspect of their lives. Many of her insights are autographical and range from small to big issues, giving her manifesto earnest, all encompassing quality.

Branded with black & white photos that make her appear a bit like Thora Birch with bits of hot pink tape affixed (this conveys the meticulous way that the musician labels her electrical gear), ‘acts of rebellion’ utilises the punk attitude Gabriela Jimeno’s gained as a drummer for screamo group Raton Perez, the skills learnt as a student of synthesizer design and uses the connotations of techno music culture as a platform to express unrestricted freedom and letting oneself enjoy their own intuitions. The first Ela Minus album displays Jimeno’s noticable nerdiness for keyboards, synthesizers and samplers through her mellow yet textured beats. Yet inside the mixture is meaningful messages that prevent it from a self-indulgent exercise. A hard feat considering that Ela Minus so much time writing and producing this manifesto in solitude.

The electronic machine-enthusiast made her album in a cocoon approach, in a similar way to how Grimes made the 2012 record Visions. ‘dominique’ addresses her process directly with lyrics that express Ela Minus’ mental state when over-consumed by her project. Honourable because a true musician tends to have this state of mind. Losing track of time: “Today I woke up at 7 p.m. My brain feels like it’s going to break / Last night I went to bed at 7 a.m. My brain is getting used to the haze.” Malnourishment: “Last time I did this I had a boyfriend. Who cooked me dinner. Now all I have is coffee and some liquor. I should probably eat something that’s not liquid. Lack of social contact: “I haven’t seen anyone in a couple of days. I am afraid I forgot how to talk. To anyone else that’s not myself.” When she says: “I don’t want to sleep with the sun comes up. I can’t sleep when the sun comes up.” it shows that her new nocturnal routine is half-choice and half-consequence of a growingly disorientated mind.

Gabriela Jimeno sings in both English and her native Spanish language on the track. Something that’s also the case on ‘tony’. Dramatic strikes of synthesized brass pierce through bouncing sequences that recall New Order if they had an Arabian flavour phase, as Ela Minus preaches a rebellion: the battle against text message dating. The Colombian musician isn’t a fan of talking and prefers the style of relationships that her grandparents had: “No seas tan modеrno. Bailemos como mis abuelos.” (Don’t be so modern, let’s dance like my grandparents). “Go dancing till the sun comes upup” could make one think of a La-La-Land style spontaneous dancing sequence in a park or being in a nightclub setting of which Minus feels so comfortable in.

The 30-year-old also rebels against another relationship norm on the full-Spanish language reminiscent ‘el cielo no es de nadie’. The battle against misjudged expressions of love. The title translates as ‘heaven belongs to nobody’ and is asking her partners to express their love through consistent time-sharing rather than through sporadic grand gestures as in the expression: “I’ll go to the moon and back for you.” This song highlights one of Ela Minus’s most effective and unique techniques on the album: the air-exhaling. In-between blinking electronics is the sound of her taking breaths. Along with her airy style of voice and how the synthesizers are performed in way that mimics humming, there’s an organic texture that shines through.

The breathing technique introduces acts of rebellion itself, as Gabriela Jimeno takes a deep exhale out (imagine John Coffey in The Green Mile), almost as if to unleash her inner demons or as a sigh of relief that she knows her purpose. The track in question, the Crystal Castles-redolent ‘N19 5NF’ and the Helado Negro duet ‘Close’ bookend the album because they begin and end this stage of Jimeno’s life. The former references the postcode of a London hospital in which she survived an illness, whilst the latter is a clever homograph because it closes this insular chapter by bringing people socially closer to her.

Although the record has many important principles from the battle for feminist empowerment on the powerful techno ‘megapunk’ to the battle against governments utilizing the internet for totalitarian control on the experimental interlude ‘let them have the internet’, perhaps the transfixing ‘they told it was hard but they were wrong’ has the most important defiance of all of the Ela minus manifesto, appealing to musicians especially. Without following this motive Gabriela Jimeno wouldn’t have made an album such as acts of rebellion in the first place. The battle against discouraging peers. People who tell that your ideas won’t work or can be done. As this album was created by the Bogota-born by herself, it exemplifies the power that your ideas can bring if you stick to your own undisturbed instincts and win the everyday battles.