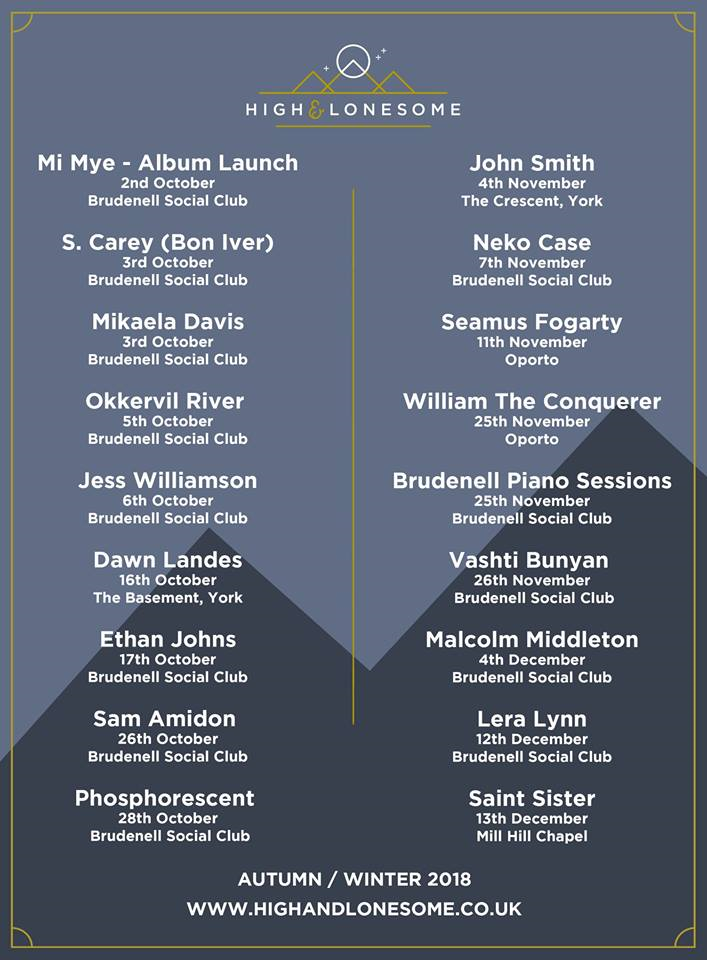 Unfortunately, due to a whole range of logistical issues that were beyond the organisers’ control, this year’s High & Lonesome festival – a little gem of an event showcasing new and alternative songwriting that has been successfully held in Leeds towards the end of November for the past four years – will now not take place. But to help soften this huge blow, the Leeds promoters of the same name have put together a rather fabulous autumn/winter schedule of shows in both Leeds and York, featuring what they rightly describe as being “a heady mix of new talent and certifiable legends of folk, Americana and beyond.”

The programme gets off to a cracking start at the legendary Brudenell Social Club in Leeds on the 2nd of October with an album launch for the Wakefield/Leeds quintet Mi Mye who are about to release their fifth studio record, the wonderfully entitled The Mountain Forces the Future, and the Force Causes the Rain on their new label Coble Records. Support on the night comes courtesy of Cruel World – before they go out on tour with fellow Leodians Menace Beach – and York trailblazers Cowgirl.

Here is a delightful taste of the new My Mye record:

A fantastic first week on the new High & Lonesome calendar follows with S. Carey (perhaps better known as Sean Carey, drummer, keyboardist and vocalist with Bon Iver) and fellow American composer Mikaela Davis (whose instrument of choice is the harp) both appearing at the Brudenell the following night.

Two nights later it is the turn of Okkervil River to take to the Brudenell stage before the Texan singer-songwriter Jess Williamson concludes an outstanding week for both High & Lonesome and the famous former gentlemen’s club. Williamson released her third album Cosmic Wink earlier this year. It is a truly celestial record that packs mystical country-noir, pop and a huge creative punch into its deep grooves.

Ten days later and High & Lonesome ventures 25 miles along the A64 to York and joins forces with another local promoter, Please Please You to bring us the American singer-songwriter Dawn Landes who relocated from New York to Nashville to record a whole bunch of great songs steeped in the classic country tradition and sound for her fifth album Meet Me At The River. Dawn Landes will be appearing at The Basement in York on the 16th of October.

When they return to the Brudenell on the 28th of October, it will be almost five years to the day since the mighty Phosphorescent last played there.  By then their new album C’est La Vie will be upon us and ‘Christmas Down Under’, the second song to be shared form the new record, gives us a great shape of what things are to come.

November continues from where October will have left off with another great run of shows including highly acclaimed English guitarist and singer-songwriter John Smith appearing at The Crescent in York on the 4th of the month and then three days later in yet one more not-to-be-missed gig, inspirational American musician Neko Case will play the Brudenell.

And then less than a fortnight before Christmas in a further selected highlight from High & Lonesome’s autumn/winter line-up, it is all back to the Brudenell to catch the brilliant Nashville-based, post-Americana singer-songwriter Lera Lynn.

Full details about all of High & Lonesome’s forthcoming shows, and how to buy tickets for them, can be found HERE