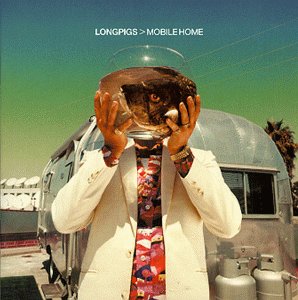 It’s funny, you know, to be doing a retrospective look at Mobile Home all these years later. When I bought it, at the time of release, I was totally underwhelmed with it, especially given that The Sun Is Often Out was easily one of my favourite albums of the 1990s.
I was so dismayed with it that whenever the subject came up over the years of “most disappointing follow-up albums”, Mobile Home, I am now ashamed to say, was my regular go-to answer.

Hearing it again all these years later, I have no idea why I was so down on it. It’s a lot better than I remember. What I’m getting now, with the benefit of hindsight, is the sound of a band constantly willing to move in different directions, not wishing to make merely ‘part two’ of their debut long-player.

‘The Frank Sonata‘, which opens Mobile Home, seems to be a smart, affectionate nod to the Bristol trip-hop scene of the time, ‘Baby Blue‘ following a similar theme, like the opening credits to some gritty spy drama, ‘Gangsters‘ recalls early James, and ‘Free Toy‘ melds U2 like vocal motifs (apt, given the fact it was released on that band’s Mother label) with the emotional pull of a Scott Walker tearjerker.

I can only think that it was perhaps because the band sound so much more ‘grown up’ here than my (possibly frazzled) young brain was able to process. It was as if Supergrass had gone straight from I Should Coco to wearing perfectly tailored suits and performing at a jazz club. Well, ok, maybe not quite THAT extreme but the shock factor would have hit me in a similar way.

Crispin and co go full-on disco for ‘Dance Baby Dance‘ and it’s just sublime, with the kind of panache that Belle & Sebastian would later go on to incorporate on their 2015 single ‘The Party Line‘ and that, in turn, is followed by the yearning beauty of ‘Miss Believer‘ and the pleasing vocal dexterity of my personal favourite ‘I Lied I Love You‘, which must surely have been inspired by classic seventies Bowie.

Anyway, my point is that I’m now eight songs in, which is almost two-thirds of the record, and have enjoyed every track very much. It’s not like it goes downhill after that either – ‘Speech Bubble‘ begins like a Turin Brakes style acoustic folk-pop song but then explodes into life like one of the more raucous numbers on The White Album. And ‘Loud And Clear‘ is just three minutes of radiant sunshine.

So yes, Mobile Home is a triumph, and that’s something I never envisaged myself ever saying. Sometimes it’s good to give things a second chance! But don’t worry, we’re definitely not going to do the Pitchfork thing of re-evaluating everything. That would just be weird.

Mobile Home is out now on clear vinyl through Demon.